A look at Voracek and the Mooseheads

Share All sharing options for: A look at Voracek and the Mooseheads 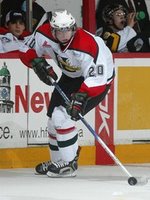 I have lived in Halifax for a few years now, and since Halifax joined the QMJHL, I have been a huge fan of the Mooseheads. We hosted the Memorial Cup in 2000, losing in the semis to the OHL champion Barrie Colts. The winner of the Mem Cup that year was the Rimouski Oceanic, led by Brad Richards and Michel Ouellet of the Lightning, and former Jacket Aaron Johnson.

That was the one and only time the Mooseheads have been to the Memorial Cup, but being the host they were guaranteed a spot, so they have yet to earn a berth in the tournament that decides Canada's best junior squad. This season however, could be the year they finally become QMJHL champions. Let's break the team down:

The offense, and team in general, is led by our boy Voracek. He's arguably the best player in the league this season, and he is looking to build off of his solid rookie year last year. He plays right wing on the top line and quarterbacks the power play, and also sees time on the penalty kill. The left winger on his line is 2007 Anaheim first rounder Logan MacMillan. Logan started the season with a concussion, and missed a few games. He returned to action around the same time Jake was cut from Jackets camp, and the pair gave a huge boost to the team. The line is centered by rookie Tomas Knotek, a very skilled Czech from Voracek's hometown of Kladno. The three have excellent chemistry, and Knotek is second in league rookie scoring with six goals and five assists in eleven games.

If I had to pinpoint a weakness of this year's squad, I'd have to go with the defense as a unit. There are some bright spots like Boston pick Andrew Bodnarchuk, one of the best puck movers in the league, and his D partner Guillaume Monast. The supporting cast includes Justin Pender, Ben MacAskill, Steve Lund, Graham Bona, Nick Goyens, Gabriel O'Connor and Richard Greer. I'd like to see the team pick up a stud blueliner at the Christmas trading period, but I'll have to wait and see on that one though.

This was a glaring weakness at the start of the season, as the team had Mark Yetman and Roger Kennedy in net. With all due respect to these guys, they aren't Q champion caliber goalies. To solve this problem, the Moose acquired one of the best goaltenders in the league, Pierre-Olivier Pelletier. He will give the team reliable net minding and will give the team confidence.

In terms of just Voracek, this has the potential to be a great year for him. He is the leader of a very strong team, and if the Moose can become Q champions, the Memorial Cup would be an excellent learning experience for him. If the Moose can actually win it- the winning attitude he could bring to Columbus next year would be huge for a transitioning Jackets team.

It will be an interesting year for Halifax fans, and Blue Jacket fans for that matter, so stay tuned as I will be covering Jake's and the Mooseheads' progress all season.