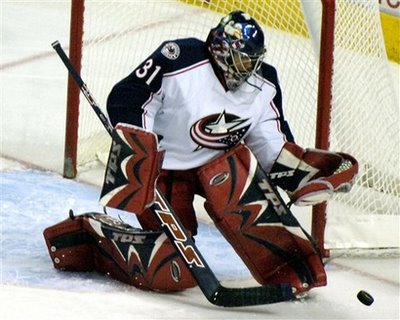 If the Blue Jackets can continue to play the type of game they played tonight it won't be long before the rest of the NHL will start to take notice. Shaking off a disappointing shootout loss to the Dallas Stars on Wednesday, the Jackets used a smothering, tight checking defense, solid goaltending and a dominating performance from Rick Nash to defeat the Buffalo Sabres on the road 3-0.


Rich Nash had a goal and an assist and Mike Peca recorded his first points as a Blue Jacket scoring his first goal and assisting on the Nash goal. Nikolai Zherdev scored into the empty net to finish the scoring.


Pascal Leclaire recorded his third shutout of the year in four starts and rebounded from a blowout loss last week against Colorado, a blowout that was hardly his fault. Of the few quality chances the Sabres had tonight, especially on the power play, he made it look easy with solid positioning and quick reflexes.


More on Nash. He was a beast in both ends of the ice, even strength, on the power play and on the penalty kill. Using his size, strength and reach, Buffalo didn't have anyone who could contain him. He is showing signs of being an elite player in the NHL this year. Some chemistry looks to be forming playing with Peca and Zherdev. I think we'll see more of this line if this trend continues.


Although the rest of the team didn't get on the score sheet there wasn't a lot to be critical of. There was a lot of energy and 60 minutes of hard work from the entire team tonight. But this team needs to get some scoring from somewhere besides the first line and guys like Sergei Fedorov, David Vyborny, Jason Chimera and even Gilbert Brule must begin to put some offensive numbers on the board.


A positive step forward. Now let's make it count by being ready to give the same effort against Vancouver on Sunday.