A View From the Terrace

Share All sharing options for: A View From the Terrace 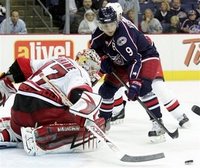 I was fortunate enough to view the game tonight from a different perspective than my normal seat in Nationwide Arena. I viewed tonights game from a Terrace table at center ice on the club level. What a treat it was. Beverage service at my seat with a smile, a flat screen TV in front of me, game stats delivered to me after each period and possibly the best view in the house.

What I saw on the ice was a different story.


I'm trying to remember that this is preseason but I'm having difficulty staying away from the ledge. There are eight days left before the season opener and many questions are still unanswered.


Steve Mason earned the third star of the game and Gilbert Brule continued his fine play but that was about the only thing to be excited about tonight, unless you were a Hurricane fan. David Vyborny was welcomed back to the ice and reunited with Rick Nash. Kris Beech made his debut centering the top line. The results were less than stellar. In fact it was a disaster. When asked during his post game press conference about it Ken Hitchcock said, "It's a work in progress."


With only two preseason games left before the start of the season that was the last thing I wanted to hear from the coach. Also alarming was that Hitch also said Adam Foote, Michael Peca and Fredrik Modin would not travel with the team for the games on Friday and Saturday.


Beech will certainly get another opportunity in the last two games but they are scrambling to find someone to take the role. Does that mean Fedorov is going to be the choice by default? What's that going to do to the rest of the lines? How come Platt wasn't given a closer look? How about giving Brassard a chance?


The frustrating part about this whole issue is that the first line center position has been a known weakness way before camp started. Looks like Hitch is going to have to go to plan B, whatever that is.