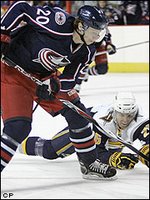 1) So far, training camp has given us a glimpse of what could be a powerhouse Blue Jackets team in the very near future. Some of the brightest stars of training camp to this point have been the young players, like Brule, Brassard, Voracek (pictured), Boll, Russell and Mason.

With lingering injuries to Modin, Peca, Vyborny and Foote, coupled with the lackluster effort from Fedorov thus far, the young players have had to step up and be the go-to players during the exhibition games. While it is still the pre-season, these players have fit in seamlessly on the top lines with incumbents Nash, Zherdev, Chimera, Fritsche, Klesla, Tollefsen and Westcott.

Last night's game against Buffalo is a great example. Columbus beat Buffalo in their barn by a score of 4-1. Brule had a pair, and the team got singles from Nash and Russell. Assists went to Chimera and Westcott with two each, and singles to Brassard, Voracek, Klesla and Fedorov.

It's not out of the question to think that as early as next season, the CBJ lineup could look something like:

With a strong season this year from the y0ung guys, that lineup could be pretty formidable. Fedorov will be long gone, and Brassard could finally give Nash a stable, highly skilled centerman. At this point, the Zherdev experiment isn't over, and if all goes well he can be penciled in at center for next year. If not, then there will be some sort of shakeup. I say this because Voracek is not eligible for the AHL until the 2009/2010 season. If he outplays Zherdev next season, Z will almost undoubtedly be moved, because in my opinion Voracek will have nothing left to prove in junior, so his only really option is Columbus. It also opens up a spot at center. Again. The team will have money to spend, so maybe next year will be the year when the team finally signs a top free agent center.

Jared Boll has been one of the surprises of camp. His intensity and willingness to stick up for his teammates has endeared him to management and fans. He's the prototype for NHL fourth liner, he mucks it up, is willing to drop the mitts, and is no slouch offensively. Manny's contract and experience might not work on the fourth line, but his penalty killing icetime should offset that. Shelley will likely be gone, as his role can be replaced by younger guys who can contribute more than knuckle-chucking.

With Foote leaving next season as well, that opens up a spot for Marc Methot. Methot is so steady, and he has been NHL ready since last year. Russell will have already cemented a spot on the team, joining the likes of Klesla, Tollefsen and Westcott. If the budget allows it, I think the team should target a free agent defender. A two-way type who can play with Rusty on the top pairing.


2) There are a couple of guys who I think are in for monster seasons. Chimera and Klesla.

Chimmer is leading the team in pre-season scoring right now, 2G-4A-6PTS in 3GP. He's been playing on a line with Brassard and Voracek. I think his experience winning a World Championship with Team Canada has helped him immensely, and I get the impression that Hitch will be relying on him heavily for veteran leadership.

Rusty on the other hand, has taken a while to establish himself, but I think this year will be his breakout season. While he was solid last year, I think you'll see him become more of a physical force this year, while seeing his offensive totals rise. He's also the only player to play in all four pre-season games so far this season. That tells me that Hitch is letting him know how much he means to this team.

3) Matt Marquardt, who was cut by the Jackets this week, will make his season debut tonight for the Moncton Wildcats. They are in Halifax, and I will be going to the game. Marquardt is the best player on the Wildcats, and should be their leading scorer this season. I'll give an update on his play, along with the other guys who are in junior this year.