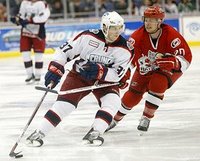 Lindstrom is a very talented offensive forward. His puck handling skills are NHL-ready, and have been for years. He is also very versatile, easily sliding into any of the three forward positions. He is extremely creative offensively, creating plays from turnovers and being equally proficient at both goal scoring and finding open teammates with crisp passes.

Lindstrom has shown a strong desire to play North American hockey. In the 2004/2005 season, Joakim began the year as an important part of the MODO offense, but after struggling out of the gate, he applied for clearance to join Syracuse of the AHL. He was denied clearance, so he completed the 2004/2005 season with MODO. At the end of the Swedish league season, he applied for clearance again to join the Crunch. He was again denied clearance, but Joakim left Sweden anyway, and joined the Crunch near the end of the AHL season, putting up four goals, four assists for eight points in 13 games. The Swedish league suspended Lindstrom for 26 games for joining the Crunch without clearance.

The 2005/2006 season was Lindstrom's first full season in North America. He put up a respectable 14G, 29A 43P season, while learning the finer points of the tougher North American game. He had a cup of coffee with the Blue Jackets, appearing in three games.

2006/2007 saw Lindstrom lead the Crunch in scoring, tallying 22G-26A-48PTS in 50 games. He was the most consistent forward on an otherwise weak Crunch team, playing serious minutes and getting a late season call up to the Blue Jackets., scoring one goal in 9 games.

Joakim has the talent to be a consistent 20 goal scorer in the NHL, but needs to bulk up and work on his defense. This upcoming season will be very important for him, he'll be 24 this December and needs to prove himself to be an NHL regular. Another season in Syracuse wouldn't hurt, but the time is now for Joakim to take the next step.

Outlook: I can see Lindstrom starting the season with the Crunch, again being their top scorer. If a top six forward goes down to injury in Columbus, Lindstrom will be one of the first call ups. He could spend serious time in Columbus this season if his play warrants it.