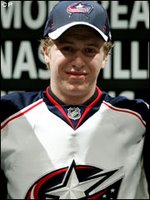 Voracek is a skilled winger with very good playmaking skills and a nose for the net. He is very creative offensively, and he can find teammate's sticks with tape to tape passes through traffic. He has a very high hockey IQ and has the ability to dictate a game offensively.

Last season, Jakub played for the QMJHL's Halifax Mooseheads. The Moose picked Voracek with the first overall pick in the European Draft. It was clear early in Mooseheads training camp last season that Voracek was a team player (dropping the mitts in an exhibition game) and a very skilled playmaker. He started the season very strong, and finished with 23 goals, 63 assists for 86 points in 59 games played. He quarterbacked the Mooseheads power play, and also spent time on the penalty kill.

The low point of last season for Jakub was the World Junior Championships. He didn't recieve much playing time, and many thought it could demoralize him and affect his play with Halifax after the holiday break. However, Jakub returned like a man possessed and played incredible hockey down the stretch, and along with line mate and Anaheim first rounder Logan MacMillan, helped the Moose to a surprising first round upset of the Moncton Wildcats.

Jakub will likely return to Halifax for the 2007/2008 season, but after a strong showing at the Traverse City Tournament, and his strong desire to make the Blue Jackets, he could be a surprise choice for the CBJ opening night roster.

Outlook: Jakub has all of the tools necessary to be a top line 2-way threat, he can pass and shoot, and is very responsible defensively. His playing style is very similar to current Jacket and fellow countryman David Vyborny.