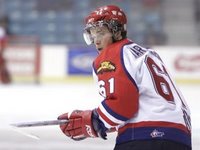 Last night was Marquardt's first game with the Moncton Wildcats since being assigned from CBJ camp. The game was the home opener for the Halifax Mooseheads, and while the Moose got off to a quick start, Moncton ended up with a 3-2 victory.

Marquardt had a slow start to the game, but in the second period he kicked things up a notch and was strong along the boards and was creating plays off of turnovers. He played both left wing and right wing, and used his size well.

He was great in the third period, being very involved offensively and making some big hits. He was one of, if not the biggest player on the ice last night, so I'd like to see him use the body more, but nonetheless he was still physical.

He finished the game with an assist and a penalty, and was a +1.