Is Beech the Answer?

Share All sharing options for: Is Beech the Answer? 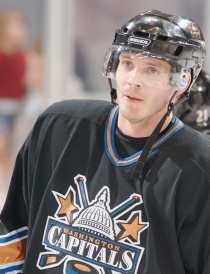 For tonight's game against the 'Canes, center Kris Beech will be the number one pivot, playing between Nash and Vyborny.

I honestly believed that by this point in camp, one guy would have rose above the rest and staked claim to the number one spot. I was hoping Brassard would force Hitch and Howson to play him as the number one guy, and while he has had a great camp, he hasn't run away with the job. I still consider him to be very much in the mix for the position still however.

I really don't want Fedorov to be the number one guy, he just doesn't have enough left in the tank. Second line? Sure. Based on his performance in camp so far, I don't think I have to worry about him being the top center.

Mike Peca is one of the elite two-way (leaning towards defensive) centers in the league. I really don't want him to be higher than the third line, and if his linemates are Chimera and one of Fritsche or Brule, he can not only excel at shutting down the opposition's top forwards, but his point totals could be very high.

Jiri Novotny was another fresh face brought in to compete for the top job. While he hasn't put up very much offense in his brief career, one could say he never had the chance because he was buried on the Buffalo roster, and his stint in Washington was far too short to develop chemistry with linemates. That said, he hasn't shown so far in camp that he is the guy. Personally, I think he's got the size and skill to be a checking line player, and with Peca on the roster, I think Novo's looking at a shift to the wing.

We all know how the Zherdev experiment worked out, so in terms of guys realistically vying for the number one center job, we are left with Kris Beech. He was a highly touted first rounder back in 1999, but he is yet to prove himself as a top NHL center. Tonight however, could be his best chance to get something going. He is playing between one of the best young goal scorers in the league, and one of the most underrated playmaking wingers in hockey. If Beech can take the bull by the horns and run with the job, then Howson can comfortably send Brassard to Syracuse to terrorize the AHL, and look like a genius for his low-key signing of Beech.