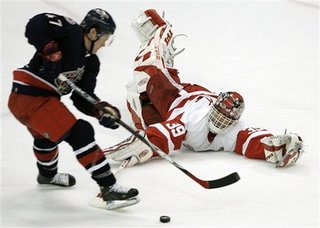 There were five more cuts at training camp today:

RW Kirill Starkov: He hasn't had a particularly noticeable camp, but he's still one of the Jackets' most exciting prospects. He had a great rookie year with Red Deer of the WHL last year, and by the end of this upcoming season he could be an important part of the Crunch offense. However, at this point, the Crunch look to be very deep at forward so a rookie pro like Starkov might spend some time in Dayton this year, a la Petr Pohl.

RW Adam Pineault: He was one of the top players at the Traverse City Tournament, and played solid in camp. Pineault will likely be on the top line in Syracuse this season, and will be a very important part of the offense. His howitzer of a shot will be put to good use on the power play.

C Geoff Platt (pictured) : Platter is extremely talented, but it seems like he never quite brings it together. He'll be the number one center in Syracuse, and it looks like his wingers will be Lindstrom (still at Jackets camp) and Pineault. That should lead to a ton of points for Platter. If he has a strong start, he could get an early call up, and it would be up to him to stick around.

D Mikko Maenpaa: Personally, I think Mikko had a great game last night against the Sabres, but overall he is best suited for Syracuse. He is an offensive blueliner, and if Russell sticks with the Blue Jackets, Maenpaa will potentially see time quarterbacking the Syracuse power play, and will be asked to provide some points from the back end.

G Dan Lacosta: Syracuse seems set in net with Popperle and Munro, unless Lacosta can really turn some heads at Crunch camp. I'd like to see him as the number one guy in Dayton however. Dayton went all the way to the Kelly Cup finals last season, and hopefully they will have a strong team again this year. The Bombers will potentially have some exciting CBJ prospects on their team this year, so they could be a Kelly Cup favorite. A winning season would be great for Lacosta's confidence, and he could form a solid platoon with Pops next season.