Share All sharing options for: Brassard and Voracek Cut 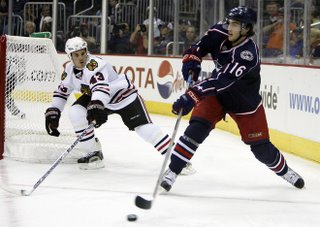 The Jackets trimmed their roster to 26 players today with seven cuts. The biggest names were Brassard (pictured) and Voracek, with Brass heading to Syracuse while Voracek is returning to Halifax. The other players going to Syracuse are Tom Sestito, Joakim Lindstrom, Sheldon Brookbank and Derek MacKenzie. Joel Bouchard was released from his PTO.

Voracek isn't much of a surprise. The CBJ are quite deep at right wing this season, and Voracek will be the star of a powerhouse Halifax squad. The Brassard cut is a bit more surprising, but after Hitchcock's comments the other day saying Brassard wouldn't be the top center the writing was on the wall, because (and I agree) if Brass isn't on a scoring line in Columbus, then he should be on one in Syracuse.

Brookbank and MacKenzie both need to clear waivers before they arrive in Syracuse. Personally I hope they don't get claimed because they will both be important pieces in the Syracuse puzzle.

I've updated the training camp roster at the bottom of the page.